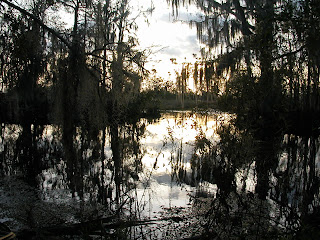 Last weekend I went to hear David Loy give a talk called “Healing Ecology: A Buddhist Perspective on the Eco-Crisis,” at U.T. Austin. Loy is a professor, the Besl Family Chair for Ethics/Religion and Society, at in . He is also Zen Buddhist teacher. His talk explored how Buddhist ideas of interconnection, compassion, and exchanging self for others, might speak to current environmental problems.

Loy first described the notion, based on the Buddhism's principle of no-self (anatta) and its attendant radical non-dualism, that to help others is to help oneself. If we accept this idea, and if we agree that we are currently facing an unprecedented ecological crisis, this principle logically leads to the fact that humans as a species must protect the environment in order to protect ourselves. There is no separation. What’s good for nature is good for us.

It strikes me that this idea allies closely with the Gaia Hypothesis, the idea that the earth is a complex living organism, of which we humans are only one part. Loy’s discussion also closely resonates with ideas of sustainable economics (or ecological economics), which question neoclassical economics’ assumption that infinite economic growth is a good thing. Our whole global market economy is based on the idea that the economy must constantly be growing, that we must always have bigger, better, faster, more, in order to be “healthy.” But isn’t that idea rather absurd when you think about it? The earth is a finite resource, and a delicately balanced system at that. Shouldn’t our economic system, in order to be deemed “healthy,” work in harmony with the larger environmental system in which it is embedded rather than positing a goal of infinite growth?

The next day I went to the Austin City Limits Music Festival and heard Erykah Badu rock out and speak out about politics and the broken system. She referred specifically to a documentary called Fourth World War (2003), which follows various resistance movements to globalization, war, and poverty. She was so moved by the film that she named her new album after it. And it strikes me that there are so many people out there, coming from so many perspectives, viewpoints, and experiences, but all seeking a change, seeing that the system is broken. How might we all come together? How might we harness all of that energy and love and put it towards actually creating change? How could we create a system that serves everyone and seeks harmony and balance, with the earth, with all people and all beings? I guess it has to come from the ground up. We are all implicated. Change begins right here, right now, with you and me, baby.

Email ThisBlogThis!Share to TwitterShare to FacebookShare to Pinterest
Labels: Spirituality / Politics / the Environment

you and me yes, but not necessarily alone - also together. It starts with the blog, chases out through myriad links. Thanks for writing this.

Melinda Rothouse (Ziji) is an educator, coach, musician, writer, performer, Aquarius, and grateful student of the dharma. An avid traveler, she inhabits that fleeting twilight space between sunset and moonrise. She holds Master's degrees in religious studies from and performance studies from 's for the Arts. Currently working on her doctorate in psychology with a specialization in creativity studies at Saybrook University, she is also the founder of Austin Writing Coach and Co-Founder of SyncreateShe has also worked as a freelance educational and travel writer for a number of years.