The Tao and the Waking Dragon: A Spiritual Journey Through Modern China 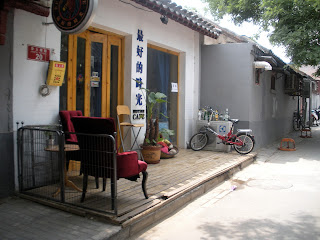 The ride from the futuristic international arrivals terminal at the Beijing airport revealed pristine highways, snarled traffic, rows of tidy apartment blocks, and modern office buildings, but I felt comforted by images of the Buddha that adorned the dashboard of the cab. I had requested a hotel within one of the few remaining traditional Beijing hutong neighborhoods, characterized by narrow alleyways framed by a mix of grey, tiled-roof courtyard houses and small shops. Our young hutong guide proudly identified himself as a Christian, eager to practice his English before attending seminary in Los Angeles. He spoke passionately of the importance of having faith—something to believe in—regardless of the dogma.

Although the communist government suppressed religious practice after 1949, and destroyed or defaced many sacred sites during the Cultural Revolution, the Reform and Opening period beginning in the late 1970s eased restrictions on religious practice. In fact, traditions like Confucianism and Buddhism have been encouraged of late by the government, which now sees them as promoting social harmony. Members of the younger generation will tell you that China is a secular society, yet in the next breath they’ll relate an elaborate Buddhist fairy tale, or explain (at the Temple of Heaven, for example) that despite religious differences, most Chinese can agree on the relationship between heaven, earth, and humanity. Older Chinese tourists bow and pray before images of traditional Taoist deities, while collection boxes housing images of the Buddha or Guan Yin fill with colorful bills and coins, even at a tourist jade factory. 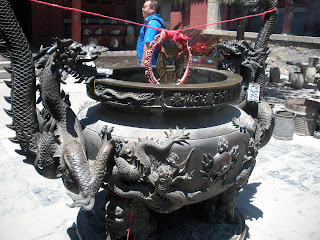 From Beijing, our quest led to Shandong Province, where Confucius taught his many disciples, and where Tai Shan, China’s most sacred mountain, rises dramatically from the surrounding flatlands. Traditionally, the route to the summit required a six-hour climb over a steep stone trail. But today visitors can take an air-conditioned bus to a modern cable car that lets off near the peak. A wide path carved from the mountaintop winds through a series of sacred gates, shrines, and temples dedicated to various deities, including the imperial gods, Confucius, and the Taoist fertility goddess Bi Xia Yuan Jun. Benedictions from ancient emperors painted in huge red and gold characters sparkle in the sunlight, while pilgrims burn long sticks of yellow incense in huge, open-flamed burners. The day we visited, my friend and I encountered only one other Westerner on the mountain; we were such an anomaly that a pair of Tibetan Buddhist monks asked us to pose for a photo with them as a memento of their journey. Reaching the Temple of the Jade Emperor at the crest of Tai Shan, with its flags billowing in the crisp breeze and the sweet aroma of incense wafting by in thick curls of smoke, one can easily understand why the Chinese have revered this place as sacred for millennia. 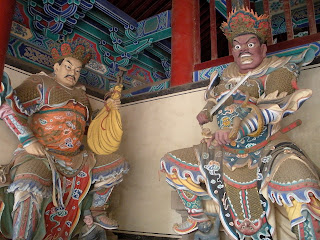 From Shandong, we journeyed by train to Luoyang, in Henan Province, which our guide described as the “Heart of China,” because of its importance as a multi-dynastic imperial capital. She noted that while Shanghai was born only a century ago, and Beijing claims a 3,000-year history, Luoyang traces its roots back eight millennia.  Indeed, many local people have unearthed ancient artifacts simply by digging a few inches into their fields. The Luoyang region hosts some of China’s most famous sacred sites, including Song Shan, Shaolin Temple, White Horse Temple, and Longmen Grottoes, a collection of spectacular Buddhist caves. To the contemporary seeker, these sites provide a marvelous window into China’s religious legacy, as well as a complex portrait of contemporary attitudes toward spirituality.
Shaolin Temple has become one of the most popular tourist destinations in China. Legend has it that Bodhidharma arrived there from India in the 5th century CE, bringing teachings that became the foundation of the Chan (Zen) Buddhist tradition. As the story goes, Bodhidharma also developed a series of postures that became the foundation for all subsequent martial arts lineages during a nine-year cave meditation. He taught the poses, which imitated the movements of animals, to his students to support their meditation practice.
A huge entry gate welcomes visitors to Shaolin Temple, framing a promenade lined with vendors selling souvenirs. One can opt to walk or ride though the complex in small, open-air electric buses. As with many Chinese cultural sites, the elaborate tourist infrastructure, along with strict government oversight of tourism, can hamper any sense of authenticity, yet the natural beauty and serenity of the area still inspire. The temple sits in a protected valley in the shadow of Song Shan, one of the China’s five Taoist sacred mountains, and still supports a thriving martial arts community. On a given day, one can observe groups of uniformed youth practicing their Kung Fu forms in unison near the temple grounds. 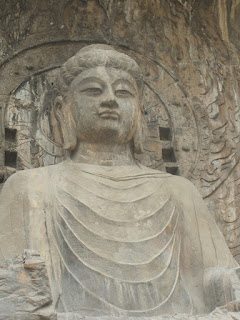 The unassuming White Horse Temple, located just outside of Luoyang, is named for the steed that arrived, along with two Buddhist monks, carrying the earliest sacred sutras to China from India. Held to be China’s oldest Buddhist temple, it was founded in 68 CE by Emperor Ming of Han, who governed from Luoyang. It’s a working temple with a contemplative atmosphere, where monks stroll in orange robes and devotees pay homage to icons of the Buddha and Guan Yin. Because most Buddhist monasteries were disbanded and destroyed during the Cultural Revolution, this type of devotional Buddhism (rather than the more meditative, philosophical traditions favored in the West) is typical of modern Chinese Buddhist practitioners.

Indeed, Buddhism has traveled a complex path in China, alternately revered as a compassionate guiding philosophy or rejected as an unwelcome foreign religion by various ruling dynasties. At the Longmen Grottoes, we learned how Tang dynasty empress Wu Zetian used Buddhism as a form of social control, pressing thousands of potentially unruly peasants into labor to create the Buddhist sculptures with the promise of rebirth in a heavenly realm. The grottoes consist of thousands of stone figures set into man-made caves and porticos, painstakingly carved into the limestone cliffs that abut the Yi river. The largest statue, an image of Vairocana Buddha, looks serenely over the valley from a height of nearly 60 feet. Some of the smaller carvings have been polished to a gleam by countless fingers rubbing them for good luck over the centuries. Many lack faces and hands, disfigured by weather, political conflict, and unscrupulous collectors, yet even the faceless bodhisattvas retain a sublime grace and dignity. 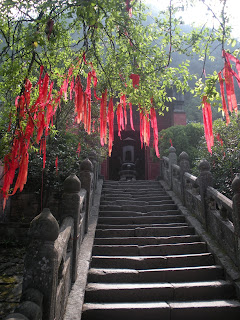 A tour of religious sites in China begs a visit to Wudang Mountain, enclave of Taoist sages and Tai Chi masters, in northwestern Hubei province. Wudang earned the designation of UNESCO World Heritage Site in 1994, and the film “Crouching Tiger, Hidden Dragon” brought Wudang-style martial arts to an international audience. To accommodate the influx of tourists, the government has created a large welcome center, deployed a fleet of buses that whisk visitors around the mountain’s hairpin turns, and even installed a cable car to carry people to the summit. Propaganda signs painted on trash bins encourage environmental consciousness with pert slogans, such as “Every Lovely Plant and Flower Needs Your Priceless Love” and “Welcome to the Natural Oxygen Bar.” Yet the steep stone stairway to the Golden Shrine, perched impossibly upon the mountain’s tallest peak, offers truly breathtaking views of cascading, mist-shrouded ridges. And seemingly unfazed by the crowds, female priests still lovingly tend the magnificent Purple Cloud Palace’s Taoist shrines. A tangible sacredness permeates Wudang, drawing both curious tourists and students eager to study Tai Chi in its native setting. 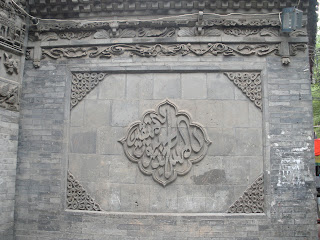 It’s not far from Wudang to Xi’an, in Shaanxi Province, home to a flourishing Chinese Muslim community. Now a formidable modern metropolis, Xi’an once welcomed Silk Road traders, and is one of the few Chinese cities that retains its traditional city walls. In addition to facilitating trade and communication between China, the Middle East, and Europe, the Silk Road also brought Islam into China, beginning in the 7th century. Today, the city’s bustling Muslim Quarter still hums with small shops and street vendors tucked into narrow alleyways, offering everything from salted walnuts and dried apricots to freshly baked flatbreads and lamb skewers. Xi’an’s mosques feature a unique fusion of traditional Chinese and Islamic architecture, providing a welcome respite from the bustle of daily commerce in the streets just outside. Indeed, ducking into one of the smaller mosques in the neighborhood, one could easily mistake it for a Chinese temple but for the Arabic calligraphy, quiet prayer hall, and crescent moon adorning the rooftop. 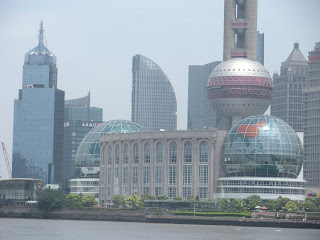 My journey through China culminated in ultra-modern Shanghai, with its international character and eclectic architecture. Even in this most cosmopolitan of cities, I caught a whiff of quiet spirituality at the lotus pond in the People’s Park. In the Buddhist tradition, the lotus represents the triumph of the spirit over materialism. It blooms for only a few weeks each summer, and on a Saturday morning in June, Shanghai locals gathered around the pond, quietly cherishing the natural beauty of this sacred blossom. 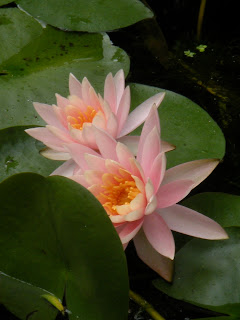 Email ThisBlogThis!Share to TwitterShare to FacebookShare to Pinterest
Labels: Notes from China

View my complete profile
Melinda Rothouse (Ziji) is an educator, coach, musician, writer, performer, Aquarius, and grateful student of the dharma. An avid traveler, she inhabits that fleeting twilight space between sunset and moonrise. She holds Master's degrees in religious studies from and performance studies from 's for the Arts. Currently working on her doctorate in psychology with a specialization in creativity studies at Saybrook University, she is also the founder of Austin Writing Coach and Co-Founder of SyncreateShe has also worked as a freelance educational and travel writer for a number of years.